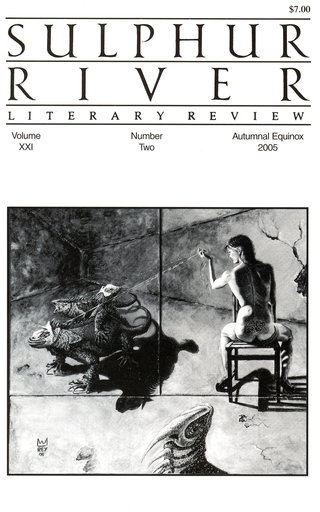 Here are some photographs I took of my mother, shortly before she died at age ninety-three from natural causes. 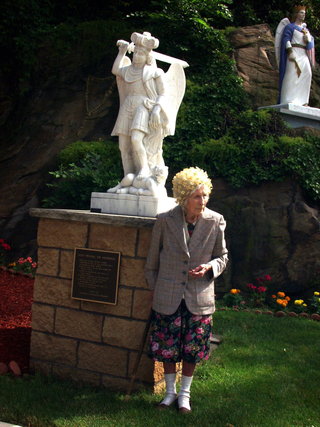 Mother in front of a statue of Saint Michael, "Angel of the Americas" is above and to the right. 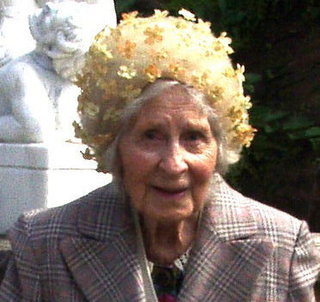 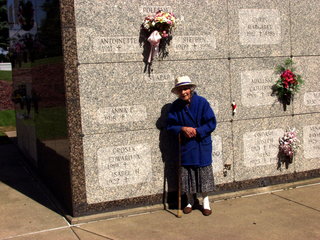 My mother, visiting the vault where she and my father now rest, 2005.

The Yupik have a word, "slunguk," that translates as "coming to." It describes when awareness first blossoms in a child, when the child stops living purely in the moment and becomes conscious of time and place and self and starts to lay down memories. 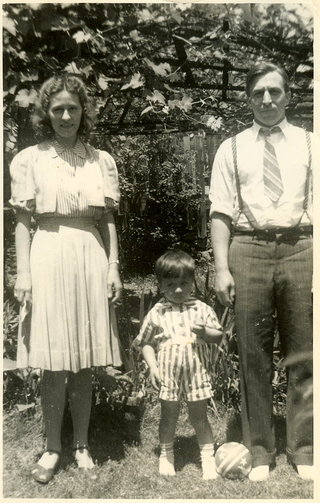 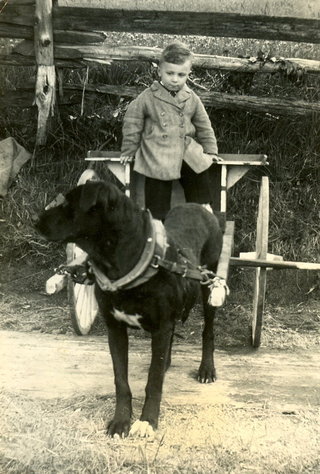 His first big adventure; Stephen on a dog cart somewhere in Canada, ca. 1942. 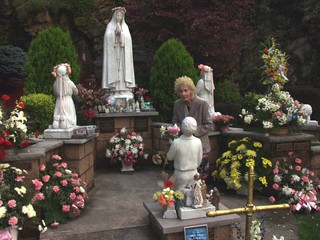 LAST SUMMER I BOUGHT cemetery plots for my wife and me; even though we didn't need them. Now I don't mean I think we are not going to die, but we already owned three plots. These had been given to me by my father when he decided he and Mom should be buried in a vault. He reasoned that since my wife and I lived 125 miles away, and my sister was 3200 miles farther, no one was about to come around regularly to put flowers on their graves and to see they were taken care of, especially since the service the diocese provided was rather remiss; that is except when it came to putting around the little American flags, which I shall refer to later.

My mother is still alive at ninety-two years. When I visit her the standard drill is a tour of the cemeteries. We load up my pickup truck with baskets of flowers, usually recycled plastic posies that she has picked from the dump bins on previous trips. My father's grave is visited first. We have been going to Mount Olivet Cemetery for six years now. As he is in a vault, we usually take what real flowers might be growing in my mother's garden, depending on the season, to put in the small metal vase that my mother has carefully safety-wired to the bracket that holds it. The reason for the wire is that these vases have a habit of disappearing, and can only be replaced with the approved version, available in the cemetery office for nintey-nine dollars. Any other vase, say a plastic one you might have bought at K-mart for nintey-nine cents, will be immediately removed and discarded by the caretakers who will replace it with a proper vase and send you a bill. After her first experience my mother not only wired the vase but also carved our last name into the surface by scratching the fake bronze patina to reveal the tin finish underneath. Such are the problems of properly honoring the dead.

Our next stop, after about a nine mile drive, which takes us past the house where they found eight bodies buried in the backyard just last year, is Saint Paul's Cemetery in Dallas, Pennsylvania. This town of about 3000 people is quite unlike Dallas, Texas, although it does have a grassy knoll. It is on this knoll that the graves we are to visit are located, just across the highway from College Misericordia. This Catholic school, as the name clearly implies, was once a girls school, but is now coed. Saint Paul's is where my three plots are located, and my mother prefers I be buried. I have not mentioned my wife's preference. The sweet woman has indicated that she wishes to be cremated. Rather than have her ashes scattered about or buried, she would like them inserted into one of her Coach bags, of which she has collected many over the years. She has suggested that I carry this bag filled with ashes about in remembrance of her. I have responded I would be happy to do this, if I am still able, since I shall probably be quite up in age if I out live her. Otherwise she will rest quite contentedly if I keep the fine leather bag hanging in mycloset and think of her from time to time.

So now I am in the cemetery where I might possibly be buried, in plots that will cost me nothing as they were paid for long ago. The view is lovely, and I have often dreamt of it. Here I am, standing tippy-toe on my coffin, for the scene is always at eye level, with the bottom half framed in grass. Across the street long-legged young women in tartan kilts are running after a field hockey ball, and I am here for eternity to watch them. Sadly, in my more recent dreams reflecting the reality of the changing times, the lean and leggy girls have been replaced by stocky things playing softball.

What's wrong with this cemetery?my mother wants to know. I explain that I will have to lie behind my Uncle Teddy and his wife and son, and next to my Uncle Frank and his wife. Of all these people the only one I actually knew was Teddy. I worshiped him in my youth because he was a pilot, and it was probably he who inspired me to my later flying escapades, such activities I would have probably been better off without. Perhaps you will think I should be happy to lie down in tandem with Teddy. However, there is another problem I shall relate.

Both Teddy and his son, whose name I cannot remember, were warriors, my uncle in WWII, and his boy in Vietnam. Although my uncle merely died of old age, when people still did that, the son died a hero's death. However, it was not in war, but rather trying to save his duck hunting buddy when he went down with his waders filled with water. On Memorial Day, July Fourth, and all the other holidays, they get little American flags stuck on their graves. My Uncle Frank in the next grave also receives a flag, though, to my knowledge he was never in the military. The whole cemetery flutters with these flags, now made in China, and which I have learned cost the government seven-and-a-half dollars, even though I have seen the same flags in the Dollar Store for one dollar. Now it would not be right that I, a notorious draft dodger who only avoided prison by revealing to the FBI that I had indeed received a wedding present from Richard Nixon, which is another story, should have a flag planted on my grave every holiday. Nor do I want one.

So I did the decent thing and bought my own two plots in King Cemetery, which is in walking distance of my house. And since my wife is adamant she does not want to use one, I will use both and stretch out. In fact the price was so reasonable I almost bought four. I regularly hike up to look at my plots, a short trip to the end of my twenty acres and then about the same distance through the state park.

The cemetery, which is near to Ithaca College, has been having a spate of vandalism lately, so last week I was greeted for the first time by the new cemetery watcher. As I emerged from the woods, the man challenged me and asked what I was doing there. I asked him the same. The man, not unattractive and rather well-kempt, told me me that by agreement of the cemetery board he now lived in a tent behind the tiny maintenance shed and watched over the grounds at night. As it was fall, and the nights were cold, I asked him how long he intended to do this, assuming he must be a writer having some kind of Henry David Thoreau experience.

He told me he planned to stay until he got back on his feet financially. With a lead in like this I could not refrain from asking him what had been his previous line of work. The watcher, who I shall call John, told a tale of being a computer programmer working at Cornell University, who had decided to go out on his own. In the great dot.com boom of the late Twentieth Century, he had migrated to San Francisco, started up a company, and then gone public. In a short time he made and lost millions of dollars.

Alas, John had arrived too late to do me any good, for just last month my marble corner markers had been stolen before they were even put into the ground. Shortly after I met him, the cemetery watcher disappeared, but left his tent, and all his possessions behind. I later learned that John was not all the things he said he had been, but rather an out patient at the county mental health clinic who did odd jobs around town.

Since I wrote the above piece my mother has died. She passed away in her sleep at the age of ninety-three. I suppose none of us can ask for more than that. 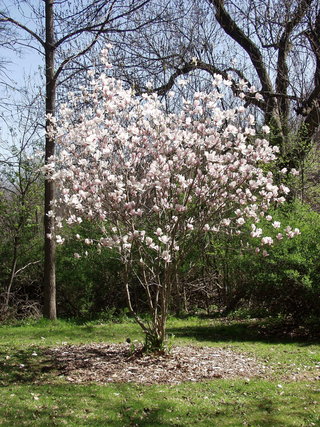